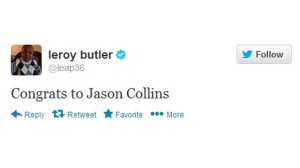 To come out or not to come out, that is the question. NBA star, Jason Collins came out. I was, in my own office, where a secretary has gay relatives, incensed at her response. She felt it’s “no ones business, children shouldn’t ‘see’ it, and why do they have to tell people”. Wow.  I was actually shocked. Not that she said or felt these things, but that it actually bothered me. I explained as best as I could, since I am straight that being in the public eye or not, having to keep that secret is an immeasurable and exhausting hardship that no one should endure.

Here I am about to anger a great deal of people.  Their narrow minded beliefs are not my problem.  I consider to myself to be a conservative. I believe in a smaller government, less entitlements, stronger family values, extremism on curbing our illegal immigration problem, and for whatever it’s worth, my continuing right—2nd amendment or not—to go to the range and shoot targets with a Smith and Wesson.   On the political social note, I do not fit the bill.  I know this for a couple of reasons—irrelevant to his story.  Therefore, it is a conundrum when trying to pigeon hole me into a political classification.  That being said, here lies today’s MASSIVE and hypocritical foolishness.

Former NFL star LeRoy Butler was to speak to a Church children’s congregation that, as a decent person, he would not name. This because of a TWEET–“Congrats to Jason Collins”.  THAT was it. He was told he could redeem himself by removing the tweet, ask for God’s forgiveness, and apologize and they would allow him—yes, allow him—to address the children on BULLYING—of all things. Major props to LeRoy Butler for respectfully refusing this ultimatum.  “I told the Pastor, blame it on my mom because my mom brought me up to love everybody,” he said.

I realize, as do most, that we depend upon words written either hundreds or thousands of years ago. I, for one, am a big fan our U.S. Constitution.  However, this is the world we live in. I stand by the THESE words, that we are all entitled to “ Life, Liberty and the pursuit of Happiness”.   And the church, of all entities, should not shun a man who came to discuss one of the most important problems of our children today—bullying—because of his open heart for another human being.  He added later, on his twitter account—“Also my mom says the message is bigger anyway, by the way I was raised in the church, and attend 3 to 4 times a month”.

I will not say who my fool is here, I think you know.