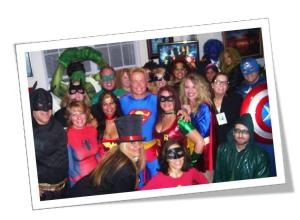 We need superheroes.  Do I say this because I was a comic book geek growing up? No. In fact I didn’t read comic books. I did however, have a pretty standard childhood filled with cartoons like Superman and the rest of The Justice League–both collaboratively and as their super LONE selves.  And when those comic book heroes came to life on TV, I became addicted to that.  I watched Linda Carter in awe, amazement and envy as Wonder Woman. Over 35 years later I dream of that Golden Lasso and how it would revolutionize the legal system—OH, it WOULD.

For me it was the TV or movie versions of the superheroes I was drawn to. Pretty normal I suppose, for a well-adjusted kid. The list for these heroes in my formative years is well—formidable. From the more recognizable heroes like Superman, Batman, and The Incredible Hulk to the near plausible Six Million Dollar Man and The Bionic Woman—I was a nerd in the herd. Even with the lesser known, if not equally entertaining, Shazam and The Greatest American Hero, having powers above and beyond normal was everyone’s fantasy—whether admitted or not.

As an adult I am still drawn. Iron Man, Captain America, any Avenger, even the TV show Heroes has me hooked. I recently started wondering if this infatuation was just a link to my childhood or something more. Is this universal love of superheroes just trying to connect to the childhood versions of ourselves or are we trying to find hope in an ever decaying world?

There is an obvious fascination held by children and adults, but what is the origin of the attraction? I know I personally don’t secretly wish for powers. Though—if I am being honest—flying and the ability to pick up a car doesn’t suck. And ninja-like skills would certainly make maneuvering crowded streets in New York more pleasant. Amazing abilities, super strength and cool toys. This list could get long! I suppose there are probably too many powers I wouldn’t mind having—even for a day.

If you spend even 5 minutes watching the news, you will see countless crimes of varying degrees of abomination. And this is where everyday life in the 21st Century creates this modern yet timeless longing for a hero to save the day. Someone to get rid of the ‘bad guys’ and clean up the streets. In essence there is a simple reason superheroes are so timeless. It is the need for good to triumph over evil. It is a concept as constant as time and as old as the bible. In a frustrated world we look for the hint of a superhero in everyday people. And when an ordinary person does a seemingly extraordinary thing—videos go viral, local news is a buzz, and it can trump a Walking Dead water cooler conversation. People smile. Even in our very human world, we seek out “super” acts. We recognize them, acknowledge them and hopefully emulate them.

We need superheroes. We need to believe. We need to act with the goodness, decency, morality and selflessness that they embody. I suppose I love superheroes now for the same reasons I did as a kid, I just see them through a grown-up eye with an even stronger wish for them to be real. It’s a tough world and we all want someone to save the day. I get cynical, but then I think… a superhero certainly could save the day. 😉