A house divided against itself cannot stand. – Abraham Lincoln

James Calvin Davis is a Christian studies and ethics teacher. Who he is and his religion aside, and even putting aside his book, Forbearance: A Theological Ethic for a Disagreeable Church – I have to agree with and share my personal concern and distress over the current climate of divisiveness in this country. I used to be quite the firecracker when it came to heated conversations. No more! I no longer share in debate and banter with friends and family because it gets ugly in seconds flat. Now, I stand in fear of antagonizing or creating a rift in longstanding friendships.

Journalism: “writing characterized by a direct presentation of facts or description of events without an attempt at interpretation”

Then, there’s my first love – journalism – a profession that has been vilified as both a career and a calling. Let us try, for a moment, and remember the importance of a free press. Today, the openness to ideas and communication is gone. Self proclaimed well-read and concerned citizens choose to ONLY hear their own voice and those who share that voice. But please think – – -one doesn’t need to agree with on a moral, ethical or simply personal level with everything we see and hear and read, BUT we do have a human obligation to weigh possibilities; to intelligently debate ideas; to actually care about a differing opinion in order to see a more valid truth. This CANNOT be the future:

How do we move forward? Who will teach future generations to communicate, to speak, to share – without being immediately dismissed, rebuked or belittled? We learn by example. It is a general belief that by the time we hit our 20’s, the measure of our integrity has been well established. So what then? I think the importance of teaching ethics is vastly under-emphasized.  It is paramount, perhaps more now than ever, to give our future generations the tools in which they are ready to engage and debate alternative views. Conflict resolution should not just be a line on a resume.

We have become a nation numb to the simple virtues of honesty, integrity and compassion. What is conveyed every day by people we should hold in great regard has become accepted behavior. Dishonesty, malice, disparagement: this is the new norm. In fact, I see it not only accepted but worse, emulated. Something’s gotta give, because this is real and this makes me sad. 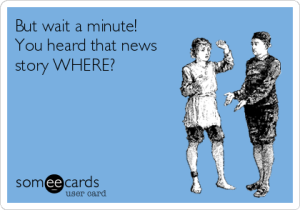 It would appear that former Mayor of New York, Michael Bloomberg—now that he already changed the NYC mayoral game by extending term limits on his own job—wants to stay in politics. He is launching a new Website as well as a Television show on his own network—also available via streaming. His TV show, planned to air daily, will be hosted by veteran journalists Mark Halperin and John Heilemann. If those names sound familiar, it would be because they are presidential election staples. Halperin from Time Magazine, and Heilemann from New York Magazine and MSNBC. But their books, Game Change—which became an Emmy nominated HBO movie—of the 2008 election, and Double Down about the 2012 election, are the standouts in their US politics/policy world.

I love the idea that Bloomberg has about this emerging multi-platform jump into US politics and policy—even if it is looking a little self-serving. [Is there a hint of 2016 on his mind?] I worry, however, more about the content. I just don’t see the diversity of open, honest, bipartisan journalism from the as-so-far announced names involved.

Justin B. Smith—Chief Executive of Bloomberg Media Group put this project together being able to—undoubtedly—careen across the already established platforms of television, radio, print, digital, and video that Bloomberg already established. Clearly a leg up on any other upstart.

I will watch with my somewhat curious if not apprehensive eye, to see how this evolves. But my gut feeling is yet another journalistic endeavor based on opinion rather than fact, or equally as disgusting, facts skewed to fit a demographic. In this case a more liberal minded, Bloomberg infused ideal. You have to remember, Michael Bloomberg was a lifelong Democrat until he switched teams in order to run for mayor in 2001. He left the Republican party in 2007. (Again, making me wonder why party affiliations should matter.)

Former Mayor Bloomberg certainly left a lengthy legacy on the city of New York, with a pretty impressive list of bans. All, of course, in the interest of his constituents. And don’t get me wrong, there were many that truly are in the best interest of people. Notable to me were the banning of smoking in bars and restaurants, and banning of trans-fats in restaurants. Then there are the more absurd things that he tried like the ban on soda’s larger than 16oz or the ban on loud headphones. At some point we really shouldn’t have all decisions made for us. We as a people, need to make educated and practical decisions and in the case of the loud headphones, people need to have respect for those around them. I fear this new endeavor will be a constant barrage of what I am supposed to think, rather than a medium for current political news based on facts from the point of view of someone entrenched in the political arena while it is taking place—if that is even possible in Washington.

I am a huge fan of Vice News and their endeavors. Fact based, first person perspective is the kind of journalism I want to see, read and hear. Internationally, they go places we don’t want to be and report things most don’t want to know, but NEED TO. If you haven’t already, follow @vicenews on Twitter. (And then follow all their reporters). Their reports and documentaries are more to my liking and I just don’t see this new Bloomberg multi platform version of Political News and Policy living up to my perhaps “implausible standards”.

I suppose I am tired of “infotainment”. And I don’t think it should be skewed, sugar-coated, or the absolute worst—FABRICATED. So I will wait and see, while I continue to get my political news via a hunt to ‘find the truth’ instead of a ‘here are the facts’ scenario. Stay Tuned,

Fool du Jour Politics AS Usual Really? REALLY? RED'S RANTS The Sunny Side of RED
%d bloggers like this: