2014 marks the 50th anniversary of much more than the birth of… well… ME.  Of course you can’t mention 1964 without starting  with The Beatles and their first appearance on both American soil and The Ed Sullivan Show. But it seems with each passing day I am faced with the number 50 staring me in the face.  Finally however, I am beginning to embrace the fabulousness that was 1964.

1964 was pretty awesome. It saw the First Ford Mustang roll off the line as well as the Pontiac GTO, President Lyndon Johnson signed the Civil Rights Act, Voting rights, and the Food Stamp program. Believe it or not, 1964 was the year the Surgeon General released the report on Smoking and Health! General Mills debuted Lucky Charms and Underdog hit the airwaves! [Speed of Lightning, roar of thunder, fighting all who rob or plunder—Underdog!] The first time we meet the Island of Misfit Toys is the 1964 airing of Rudolph the Red Nosed Reindeer.  Sports Illustrated had their very first swimsuit issue—crazy, huh? This same year saw Martin Luther King presented the Nobel Peace Prize and Cassius Clay, (Later to become Mohammad Ali), TKO Sonny Liston for the World Heavyweight Title. This is one fabulously amazing year.

Though I was clearly too young to enjoy it, the remains of the 1964 New York’s World’s Fair are still right there to enjoy in Queens—and equally important—for all to see in Men in Black.  So much of my childhood is rooted in the year of my birth. Charlie and the Chocolate Factory—later to be an awesome movie as Willie Wonka and the Chocolate Factory—is published. One of my Dad’s favorite movies—It’s a Mad, Mad, Mad, Mad World—is released.  Mary Poppins, My Fair Lady  and 007 in Goldfinger also hit the big screen.  I think the longevity of ALL of these films and who I became speaks volumes, but perhaps I will delve into that in my 51st year. 🙂

Though I first recall the Sony VCR some 12 years later, it was introduced in 1964 along with the creation and introduction of the 8 Track–one of the short lived breakouts of 1964.  But a perennial favorite of mine…BUBBLE WRAP is still cushioning and entertaining us today.  What I think is most impressive about this year is its endurance, longevity and popularity.  Hasbro introduced GI Joe and  we saw those God awful trolls in 1964. Hess introduced the Hess Truck, still popular today!  AND, where would we all have been on Super Bowl Sunday without a little something invented at Anchor Bar in Buffalo those 50 years ago.  (God bless Buffalo wings.)

Television saw the premier of Bewitched and Jeopardy–took me a while to start getting that final Jeopardy question right but I could wiggle my nose so that seemed a fair trade-off.  Broadway saw Fiddler on the Roof, Funny Girl, and Hello Dolly.  (I am proud to have a lifelong love of Broadway.)

Musically—beyond the Beatles—music is forever changed.  The Rolling Stones release THEIR debut album, The Jackson Five is formed, Bob Dylan releases “The Times They are a-Changin” and The Kinks, “You Really Got Me. THIS was the year that saw Daltry, Townsend, Entwistle and Moon form THE WHO! The Moody Blues was formed.  1964 saw the collaboration of what would later become Lynyrd  Skynyrd when Ronnie Van Zant, Allen Collins and Gary Rossington got together. Three Dog Night and Lou Reed’s The Velvet Underground… my goodness, who knew so much could be attributed to ONE single year.

Then there is Food… glorious food.  3 High School friends from Hoboken open the first Blimpie Sub Shop and the fresh sliced Roast Beef Sandwiches of Arby’s opened the same year. And 1964 NOT ONLY saw the first box of Lucky Charms, it saw the first box of Pop Tarts, first box of Bugles, first time Coca Cola came in cans, first can of Ruffles, first Carnation Instant Breakfast.  And one can’t leave out a little something called “Supercrema gianduja” which eventually was renamed NUTELLA in 1964. In a food related birth, there is Bobby Flay.  I am a little jealous of 1965 that saw Shake and Bake and Cool Whip, but I guess we half century folk got to enjoy it anyway. 🙂

When it comes to people—aside from my friends born in the same year—we are in some pretty cool company. In fact, so many amazing people were born in 1964, I couldn’t possibly mention them all. But, in referencing my own personal life, I will mention the ones that I recall making some sort of an impact.

These are JUST some of the people who in some small way impacted my world in MY 50 years on earth.  And, let’s be honest, it’s been an interesting time SINCE 1964.  The world has changed, technology has gone further than some science fiction could have imagined 50 years ago. People have changed and thankfully, continue to do so for the better.

When you think about a person’s lifetime think of this, the year I was born the computer mouse was invented, and it will likely be obsolete in my lifetime.  50 years is both an enormous amount of time, and yet a blip on the radar.  But for me and anyone else born 50 years ago, I think 1964 will always be pretty magical. 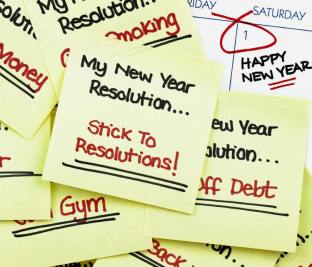 I have often wondered if New Year’s resolutions are merely an American cultural compulsion or a worldwide phenomenon. Personally, I think by labeling some grandiose idea you have a resolution, you are setting it up for failure without even requiring a new year.

What if—and I know this is crazy—we just set some goals that can literally start on ANY given day of the year, and just—gosh, I don’t know—tried really hard. I had my annual “Resolutions pie chart” ready and waiting for the chime of 2014 in my hand when I realized—who am I kidding?  The likelihood of any of these coming to fruition are less likely than my winning the lottery. Oh, were you wondering about my “Resolutions pie chart”?  Of course you were. About 20 years ago, I fell madly in love with pie charts.  Not having a real use for them, I decided I would incorporate them into my life by being my visual reminder of the many things I wished to change with the coming year.  Each piece of the pie would represent the importance to me by percentage. For example, wanting to change my eating habits—60%.  Wanting to have more self-control of my online shopping habit—15%.  And so forth and so on with the myriad of changes I wish to make, but inevitably won’t.

The truth is, for myself at least, that I fear in the back of my mind I allow resolutions to fail because no one really expects them to succeed anyway. It is almost a joke when you say… “yep, already broke THAT resolution”.  I don’t want the changes I wish to make to be THAT easy to walk away from. So this year will be DIFFERENT.

This year’s pie chart is a solid cobalt. 100%. I will, on a date known only to me, set forth and make the changes in my life that I wish to genuinely accomplish. With NOT participating in the rote perfunctory habits of a culture, I feel that I might actually be able to proceed and succeed with my goals.

Since the word resolution has become practically inconsequential in reality, I think everyone should jump off that supercilious bandwagon. Make the changes you want, live the life you want, and be the person you wish to see in the mirror every day… in a way that WORKS—in your own timeframe. That is my plan.

So, HAPPY NEW YEAR to everyone.  May the coming year be filled with good health and happiness.  May you—and I—bask in our sense of self and be overjoyed.

Fool du Jour Politics AS Usual Really? REALLY? RED'S RANTS The Sunny Side of RED
%d bloggers like this: